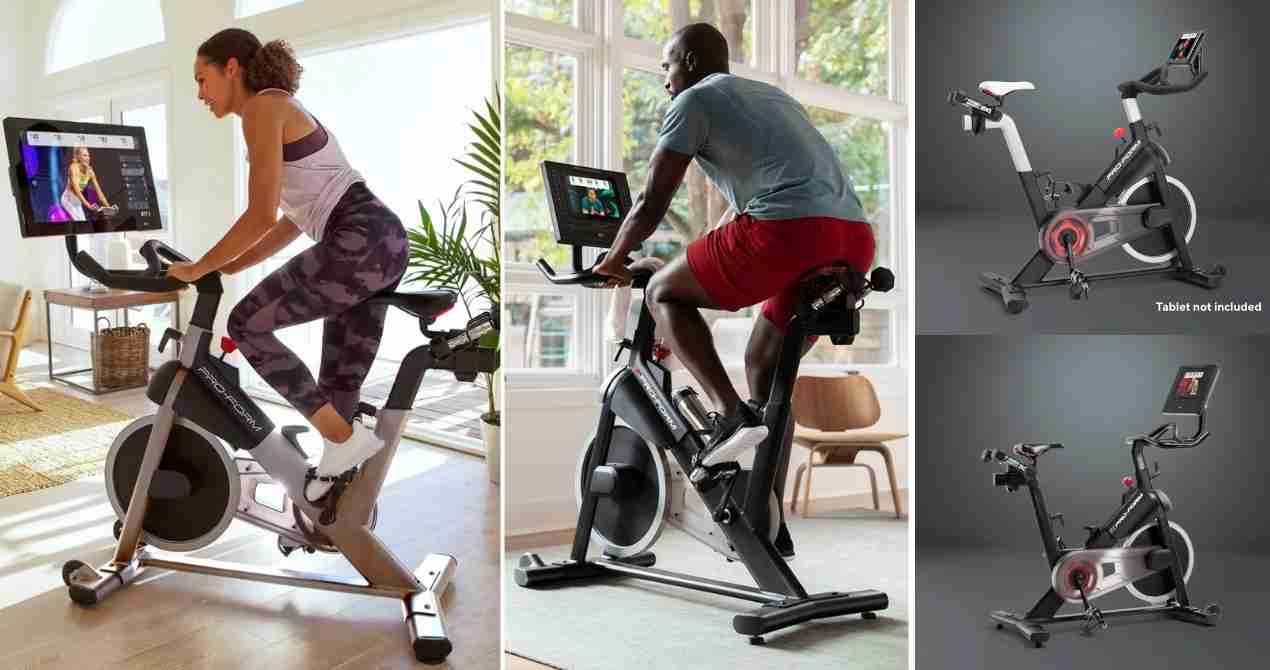 ProForm is often considered to be one of those brands that is in-active competition with Peloton in regards to their spin bikes. Which makes sense, as they are making the same products. However, what gets compared less often are the ProForm indoor bikes with one another. After all, it would be nice to know just how they hold up against one another and which one represents the best deal for those searching for a way to exercise on an indoor cycling bike at home.

That’s why we are going to do a side-by-side comparison of some of these bikes today. We’re going to look at the individual elements of each bike and see how they stack up against one another before giving our final thoughts at the end of the piece. So, with all of that out of the way, let’s hop right into our ProForm Indoor Cycling Bike Comparison!

Compare ProForm Indoor Cycling Bikes With us
Table of content

Up first is our comparison of the technical specs of each of these indoor bikes. Now, because these are all made by the same company, you won’t find an outrageous amount of difference here. For example, every one of them has a listed max user weight of 250 lbs (113 kg). This is actually surprisingly low, as many modern spin bikes from these sorts of price ranges have limits of at least 300 or more.

They also share relatively similar footprints, so none of them will be taking up too many different sizes in your home. The Studio Pro and Studio Pro 22 share the same length and width, with the Pro 22 being only slightly taller. This is almost entirely due to the increasing sizes of monitors on each of the bikes, as the screen at the front progressively gets larger and larger with each model (more on that in a bit).

All three of these ProForm spin bikes share the same width. The weights between the Studio Pro 22 and the Carbon CX are the only spot where it differs massively, as the Pro and Pro 22 weigh 15 and 19 lbs more respectively than the Carbon CX.

In general, there isn’t anything out of the ordinary about the technical information of these three spin bikes outside of maybe the maximum weight. But even then, it’s not as though 250 lbs (113 kg) is a strange number. It’s just out of the ordinary for this price range.

Up next we have some of the more important elements to making an indoor bike actually worthwhile: the drivetrain, resistance, flywheel and pedals. Once again, there aren’t too many variations between these ProForm spin bikes, but there are elements that were concerning as we did our research on them.

The first issue is that there’s not a whole lot of specific information on the bikes themselves. One the “Specs” section of the ProForm website on each of them, the Q-Factor (distance between the pedals) isn’t listed, the gear ratio (how many times different gears in the bike turn) is nowhere to be seen, and the drivetrain is hardly mentioned. This is not a great look on ProForm themselves, as you’d usually expect the company that makes the bikes to tell you what they are made up of. UPDATE! It was confirmed that all these three Proform indoor bikes are built with a 197mm Q-factor which might be considered too wide for elite users.

As for the information that we do have, all 3 of these ProForm bikes are extremely quiet when in use thanks to their combination of a magnetic resistance system and a belt drivetrain. There are different levels of resistance available on each of these spin bikes. The Carbon CX has the lowest amount, with 16 levels. The Studio Pro has 22 levels available, while the Studio Pro 22 has 24 levels. Each of these can provide a challenge, but the more levels, the more you can fine-tune your experience.

On each of the bikes, there are also different options in regards to the pedals. On the Carbon CX, the pedals are caged and that is it. On the Studio Pro, you have the option of implementing those toe cages, but you certainly don’t have to. On the Studio Pro 22 there are toe clips and straps available for use.

Then, finally, there are the flywheel weights. Many people assign great importance to this, as they consider it the measure of how much challenge the indoor bike can provide. This isn’t always true, as we’ve examined in our other piece on flywheel weights. However, heavy flywheels certainly still do the job. The Carbon CX has a flywheel which weighs 23.5 lbs (10.6 kg), while both the Studio Pro and Studio Pro 22 have flywheels that weigh 32 lbs (14.5 kg).

Now we’re going to look at the elements of the bike that you’ll probably interact the most with because, well, it’s a bike. The handlebars and seats have been pretty important to bikes for a while now, and the same remains true even for indoor cycling bikes.

However, almost all of the handlebars and seats on these ProForm indoor bikes are identical in terms of what they offer. The handlebars on all of these ProForm spin bikes are only adjustable vertically, with 5 different levels available. This is somewhat expected on the Carbon CX, although it would have been nice to see some horizontal adjustments on the Studio Pro and Studio Pro 22 bikes. Regardless, it should work for most people.

Similarly, the seats on all of these ProForm stationary bikes are adjustable in the same manner. Each can be adjusted both horizontally and vertically, as most seats can. There are 10 different settings for the vertical height and 3 for the horizontal. Again, it would be nice to see more options, but it should work for most people. What might not work is the seat itself. One of the most common complaints about all three of these spin bikes is the complaint about the seat comfort. Fortunately, this can be solved by replacing the seat with another, more comfortable option or simply putting a cover over it.

Another common element on many spin bikes these days is to have an extra media tray for any books, tablets or phones. Only the Carbon CX has one of these, as the other Studio Pro bikes rely on their monitors for providing all of the entertainment and functions.

Here we’re just going to go over a couple of elements that didn’t really fit with any of the other categories. Really quickly, all three of these ProForm exercise bikes are identical in regards to these little bonus features. They all come with 2 3-lb dumbbells that will allow for users to get some upper-body workouts alongside all the pedalling that they do. To do all this exercising, they also have water bottle holders available in order to keep you hydrated.

We now reach the part that is promoted the most alongside these bikes, perhaps even more so than the physical bike elements themselves. Each of these ProForm indoor cycles comes with a minimum 1-year subscription of iFit membership, allowing users to join live workouts, track their workout statistics and access different exercise programs that have been stored in the program.

The monitor that displays these programs on the Carbon CX is not actually measured in any sort of real size, as it is merely described as a “large LCD display”. This display can track the speed, time, distance and calories burned statistics of your workout. The Carbon CX also comes with a 1-year iFit membership, although you’ll have to pay independently to keep it up afterwards.

Both of the Studio Pro bikes have touchscreen displays, with the Studio Pro having a 10 inch display and the Studio Pro 22 having a 22 inches display. Both of these monitors can track a heck of a lot more statistics than the Carbon CX, as they can track all the stats we mentioned previously and many, many more. You can see (not save) your cycling progress and stats on the free-version of iFit but you can’t save workouts or access spinning classes once your membership runs out. Speaking of, the Studio Pro actually comes with a larger membership than the Studio Pro 22; the former has a 3-year Family Membership compared to the latter’s 1-year membership (it might change by the time you are reading this review).

As a bonus, there are also auxiliary audio ports available on both of the Studio Pro bikes, allowing you to plug into a better sound system if you wish. This could be particularly helpful if you have a hard time hearing the cues during the workouts on the monitors. Overall, the monitors might not be the best of all time thanks to their reliance on iFit memberships, but they should certainly do the job for most. Note. ProForm indoor cycling bikes are designed to exclusively work with the iFit application therefore, you can’t install any other application these monitors. I know it sucks! But that’s how many companies including Peloton are built so you can only buy their app if you want to get access to classes.

Now we come to the price and warranties, where many people will make the decision on whether these bikes are worth it. Starting with the Carbon CX, this is a $600 bike with a 10 year warranty on the frame and 1 year on the parts and warranty. It’s the cheapest of the lot by far, and is for those who are mostly going to test the waters with one of these machines.

The Studio Pro costs $1403, with a 10 year warranty on the frame, 2 years on the parts and 1 year on the labour. This is more than double the cost of the Carbon CX, and it certainly has some more features. The 3 year iFit subscription is definitely a bonus compared to the 1 year ones of the other 2. The only part that you’d be getting less of is the size of the touchscreen display.

The Studio Pro 22 costs nearly $100 more than the Studio Pro, and nearly all of that goes towards the larger display. It has the same warranties, same parts, same everything pretty much. However, you’d also be paying $100 more for 2 years less of an iFit membership and a bigger screen.

What We Think About ProForm Spin Bikes

Rather surprisingly, the bike that seems to offer the least for the cost is the ProForm Studio Pro 22. While it is a quality spin bike, the fact that you can get a nearly identical bike for $300 less with an even longer iFit membership already paid for just means that it looks like a bad idea to invest in it (unless you prefer the whooping 22″ monitor).

That concludes our ProForm Indoor Cycling Bike comparison. As always, these are suggestions rather than rules, and we recommend you do some of your own research in order to make sure you pick out the best bike for yourself. Now get out there and get cycling!

The Best Budget-Friendly Spin Bikes in 2021

We will be happy to hear your thoughts

“The best spin bike reviews on the internet. Excellent!”

“WOW…everything I need to know. Thank you very much.”

“Thanks for the Keiser M3i indoor cycle review, it was really helpful”

The Best Budget-Friendly Spin Bikes in 2021

Your Exercise Bike is a participant in the Amazon Services LLC Associates Program, an affiliate advertising program designed to provide a means for sites to earn advertising fees by advertising and linking to Amazon.com.

All rights reserved to Sayed and yourexercisebike.com, 2016 – 2021. Unauthorized use and/or duplication of this material without express and written permission from this site’s author and/or owner is strictly prohibited. Excerpts and links may be used, provided that full and clear credit is given to Your Exercise Bike (YEB) Team with appropriate and specific direction to the original content.