When Peloton released the Bike, it was huge. The market, I don’t think, was ready for how big it was going to be. Many bike companies at the time were looking to get an interactive bike out on the market, and it was a race. Peloton marketed well and became one of the biggest brands in indoors cycling over a brief period. They have created a fantastic product and made an amazing community which is something special.

In the months and years after, other brands started popping up and making some impressive features like the NordicTrac S22i, which could raise the front up and down and had a fan inbuilt into the Screen. We had bikes that you could adapt to suit you more and even saw bikes that were made to replicate Road Racing bikes. It was time for Peloton to up their game, and that came in the form of the Bike +, which had quite a few features that the original Peloton didn’t have. The Screen was bigger and better. Now you could see the leaderboard and your instructor right up close. The Bike could change resistance automatically. The speakers were better, and it even had a much more powerful front-facing camera. One change was made that caught people’s eyes, though.

When people said that you could swivel the Screen around to assist you in the Yoga or Strength Workouts, many Pelotons went on the market as everyone wanted the plus. It was like a new iPhone had come out, and everyone wanted this ability and the latest technology. The market was full of screen monitor adjusters for Peloton bikes, and it wasn’t too hard to find a pivot monitor mount adaptor for the Peloton Bike. Many people didn’t realize it was pretty easy to convert your original Peloton to do this, and in this article, I want to explain a few products that will give you the option to do this. Here are a few products that give you the opportunity to pivot your Peloton bikes Screen and give you the screen adjuster for your Peloton. These are also called rotation adaptors for your Peloton bike.

This pivot for Peloton bike isn’t compatible with the Bike +. This handy little bracket gives you the option to spin that Screen round and get it set for your off-the-bike workout. This 360 degree screen monitor adjuster for Peloton Bike comes in at about $55 and comes with a year warranty in case of any issues. 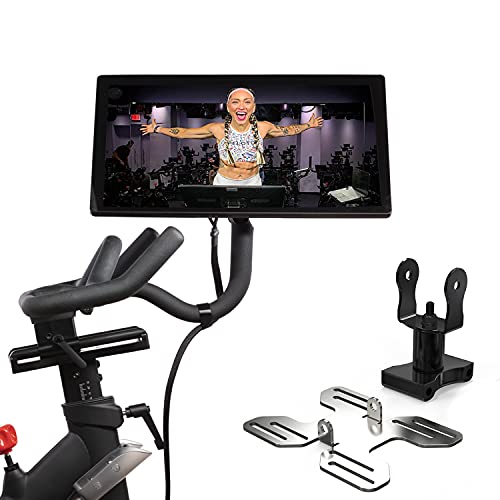 in stock
Buy This Item
Amazon.com

Although very similar to 360 Degree Aviation, it’s very different. The Dual Pivot on this Peloton bike screen adjuster gives you the option of having two screens on your Peloton, one for the front and one for the back. The extra pivot bracket does offer a different level of movement to this system, and it’s pretty incredible to have the option of two monitors. It’s an astonishing bit of kit and offers you the ability of a single Peloton indoor cycle screen pivot adaptor. 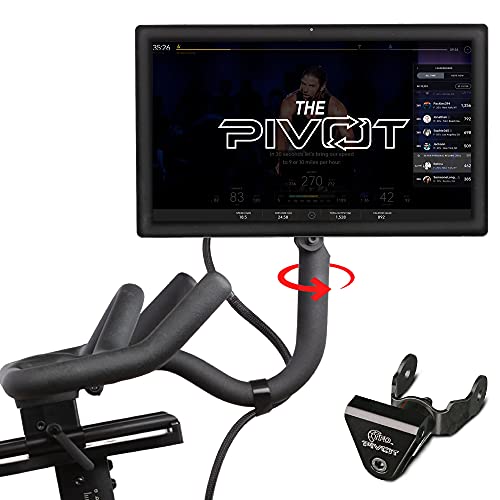 The last rotation adapter for Peloton Bike I want to speak about is the Spintray. They have made many products like this on the market and are very efficient in designing these systems. This screen adjuster for Peloton bike gives you the option of a single screen, and the mount is tiny and stealthy compared to 360 Aviation. It comes in at $55 and is excellent value for money when looking for a pivot for your Peloton bike. 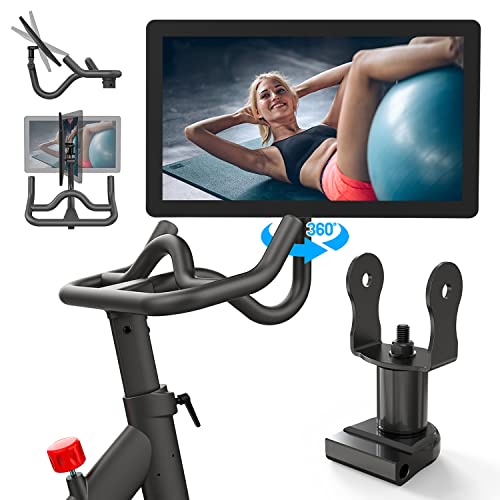 There’s very little in between these systems, and really unless you want two screens, any of these will work, and they will do the job well. There were many I have seen, and some were better than others. I went for these because they are very strong, and I trust them with my Peloton Screen. Any of these will be perfect. I like the TDF rotation adaptor for the Peloton bike myself as it is a bit smaller, made in the US, and sits more flush than the others. For more Peloton accessories that can improve your rides check out my recent round up.

The Best Peloton Bike Mats for Every Type of Flooring

We will be happy to hear your thoughts

My name is Sayed, I am an Afghan living and loving the capital of Italy. When I am not visiting the Uffizi Galleries in Florence, the Vatican Museums in Rome, exploring the Dolomites or enjoying what Sardinia has to offer, I come to this website to write about indoor cycling and exercise bikes. I founded yourexercisebike.com (YEB) in 2017 and I am an indoor cycling enthusiast who has been involved in designing cycling parts, importing spin bikes, and rowing machines to the EU market. I am also the founder of the Rock Fitness Pro fitness equipment brand. Content on this website is provided not only by me but also by top-notch studio cycling instructors from the UK, Canada, and the United States. All bringing a wealth of experience within the field. All our contributors are brought together with one sole purpose, offering honest, professional cycling advice, tips, guides, and product reviews.

Testimonials From Our Readers:

“The best spin bike reviews on the internet. Excellent!”

“WOW…everything I need to know about exercise bikes. Thank you very much.”

“Awesome website. The attention to stationary bike specs is incredible.”

“Thanks for the Keiser M3i indoor cycle review, it was really helpful”

What is a Spin Bike? Everything to know About it

How to Choose A Comfortable Padded Indoor Cycling Short

All rights reserved to Sayed and yourexercisebike.com, 2016 – 2022. Unauthorised use and/or duplication of this material without express and written permission from this site’s author and/or owner is strictly prohibited. Excerpts and links may be used, provided that full and clear credit is given to Your Exercise Bike (YEB) Team with appropriate and specific direction to the original content.

Yourexercisebike.com (YEB) is a participant in the Amazon Services LLC Associates Program, an affiliate advertising program designed to provide a means for sites to earn advertising fees by advertising and linking to Amazon.com.